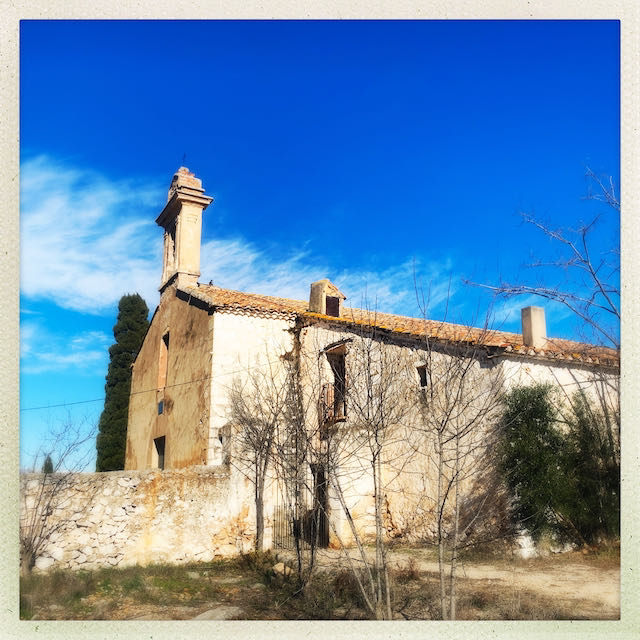 Quite a big area , just outside the village, is walled and between those walls there is a church or a hermitage.This  hermitage, built at the end of the 16th century and has an eventful history, as I can read on wikipedia and some other website. They think it took around 14 years to build this hermitage and the rooftiles were made in the ‘factory’ situated at our neighbour’s house.

As far as I have been told the Ermita is only opened once a year: on the first Saturday of May, when The Virgin brought back to the town Cabanes from Les Santes, where it is the rest of the year. On that day everybody goes walking to les Santes, and pick up ‘Mare de Déu del Buen Suceso’, the patrona of Cabanes. Everyone with the Virgin arrives that Saturday around 13 o clock. (Thank you Maica!)

El Calvario de Cabanes is located to the south of the town, on the outskirts, at the end of the street of the same name and on the other side of the Barranc del Ramachol.

The complex, enclosed and closed by a stone fence on a small elevation, includes the Via Crucis houses with the typical cypresses and other vegetation and the Hermitage of the Santísimo Cristo de la Agonía, located in its southernmost part.History and Conservation
The hermitage, built at the end of the 16th century (1575), has had an eventful history.

Originally dedicated to the Virgin of the Rosary, it was the scene of executions carried out by the Napoleonic troops of Marshals Suchet and Ramfort, who before retiring in 1811 set the temple on fire, leaving it in ruins. Materials from the abandoned Hermitage of Miravet were used for its repair, and since then its dedication to Christ has been changed.The chapel is dated at the end of the sixteenth century, possibly in 1575, it is initially dedicated to the Virgin of the Rosario.

The place was the scene of a series of executions that took place in the area by the Napoleonic troops of Marshals Suchet and Ramfort, who, before retiring in 1811, set fire to the temple, leaving it in ruins. Only the image of the Virgin was saved from the fire, which went first to the church of [Àlbalat dels Ànecs | Albalat]] and later to the parish.

Later its restoration was carried out, using for it materials from the abandoned Hermitage of Miravet, and it is at this moment when it is decided to change to the dedication to Christ, taking advantage of the devotion that during the eighteenth century awoke in the Valencian region towards a Passion of Jesus Christ.

Thus, after its desecration in 1810, it remained unused for years, but in 1853 it was dedicated to the Holy Christ of Agony, a carving that soon after was transferred to the parish in prayer due to the terrible cholera epidemics that affected Cabanes between 1855 and 1885.

After the civil war and the post-war period, on February 12, 1961 the Stations of the Cross were blessed and two of the chapels were dedicated to the Virgen del Rosario and San Vicente Ferrer. In 1975, as a plaque at the entrance of the hermitage commemorates, the IV Centenary of its construction was commemorated.