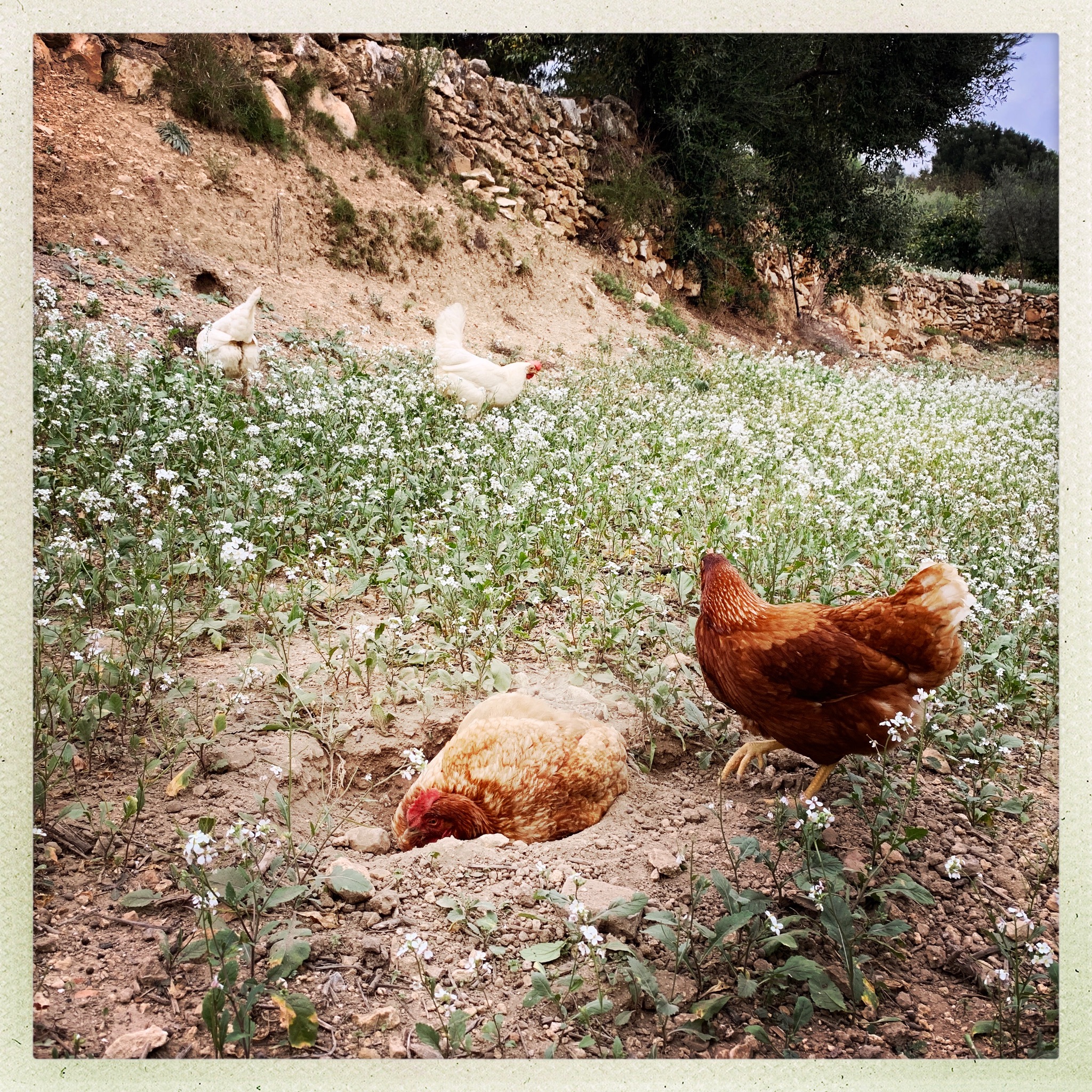 I’ve been sick for a few days. Kind of the flu, 4 days in bed and now I’m up but need some more rest.
So this newsletter will be a little later, but of course that doesn’t matter at all.
There are again many topics that I want to talk to you about.

Unfortunately we couldn’t go to the annual festival in the village over the weekend, because I was sick. I don’t know if I would have really liked it that much, but I’ve been hearing about it for years and was curious what it would be like. It is a kind of farmer’s market, where goods from the area are sold and there is a party.

Normally centered on the village square and around it, but now in a different place because of C. Well I wasn’t there.

What was striking was that the publicity was not only in Valencian, but also in Spanish and even English. While normally all publicity is in Valencian and that is quite difficult to decipher.

Last week I reported the loss of Kip Koos, well it has been a battle last week, because there is only 1 chicken left.

Koos passed away on Sunday, on Thursday morning John found out that Kip Lily had been removed from the loft, only a few feathers remained.

We had already decided then to lock up the chickens in their run when we were not there, which by the way is quite large and with a lot of plants and nice interesting places for chickens. But when we were there, they were allowed to let loose, until Kip Annie suddenly disappeared. Somewhere far in the yard, John found a few more feathers and nothing else.

So now we only have Kip Hans left and he is now locked in the run. John has sawed off the fig tree, so that no animal can get into the run via that tree. And he’s trying to make the run even more stealthy than it already is. We hope that Hans will survive the coming time, because we now think that there must be a fox nearby and of course he now has a place where he can get something tasty.

Part of our site was already fenced, but a few months ago we fenced off a large part of the site, but we weren’t quite finished yet. At the top next to the entrance there is still a piece open and a door has to be made to open the gate. In addition, there are a few places where it is difficult to place a fence. I recently met a man who said he was the neighbor and owner of the adjacent almond field and told him where he lived. there to the left and then to the right there. I’ve long forgotten that of course. But it was also the man of the swimming pool, which will only open again in July.

The next few days we want to buy 1 chicken to accompany Hans. In two weeks we will go to the Netherlands for a week or two and then we will decide how many chickens and whether we might not need a rooster. Maybe that’s nice too, adding a rooster.

The dog
Last week I reported that the dog that has been eating the leftover bread in the dark for months, came by once when it was just getting light. This week he came again and of course we gave him something tasty to eat and I don’t think he has ever been cuddled so well, because he doesn’t want to leave. It is really a super sweet, large dog and still looks very good, so it cannot be otherwise that he has a home somewhere.

When we opened the gate to the site this morning, he came running very enthusiastically. I also understand that he especially likes it because he gets good food and to give nothing, we can’t do that. So we’re going to make a poster where we put our phone number and see if a boss shows up or else we might have to find him a good home.

He really is a super nice dog, but of course he doesn’t listen at all and does exactly what he wants. Especially when I’m sitting comfortably demanding that I pet him all the time. which I like of course. And he always goes after the little cats, so putting food in front of them is really difficult. Today I threw it some chunks through the drainpipe. When we leave we make sure there is food on the terrace for the cats. The dog can no longer reach it.

I wrote this story yesterday and today (Friday 3/12) new Belgian/Dutch residents of Cabanes were visiting and they suddenly remembered that a few weeks ago a woman had stopped at their property and asked if she had seen a black and white dog. They did not know that woman, but the contractor from the village who was working there did, so he has now been called and is going to approach that woman. Hopefully we will soon find his old boss again, because he is very sweet, but reckless towards the cats.

A few months ago I had attempted to make apple cider vinegar with some apples from the garden. These apples are not really tasty to eat.

Large jar filled with apple pieces, added sugar and water. Care was taken with a cup that the apple was under water and a tea towel over it against the insects and put away. Of course I hadn’t read the recipe completely, because later I found out that it says that you have to stir regularly. I never did.

But today I tasted and smelled it and it is real apple cider vinegar.

I used part to make ‘fire cider’ and the other part I sieved and poured into a bottle and put in the fridge.

A nice layer had actually formed, I took it off and it is also in the fridge. I want to make some apple cider vinegar again soon. But first I would like to buy a nice big stone pot with a tap.

‘Fire Cider’ is an elixir against viruses and bacteria and is made from apple cider vinegar with a number of additions, which can vary completely and you can just come up with your own combination.

This time I used the following ingredients: ginger, onion, garlic, black garlic (because I had to use it), peppercorns, rosemary.

Now I put it in a dark place and try to shake it daily as often as possible and after a month I can take it seven and a tablespoon every day as prevention and if I get complaints I can take two tablespoons. Would have come in handy now. I’ve used this once in a while years ago. In the beginning I thought the taste was reasonable, but at a certain point I started to dislike it. But try again.

You can use this mixture also with preparing food.

There are many recipes you can find online. This is one.

This week I picked a number of pine branches and removed the needles. First tried with a food processor, to get those needles small, but that didn’t work. I cut them into smaller pieces with scissors and heated them in a bain marie with our own olive oil. Once the water was boiling in the pan, I put it on the fireplace and it stood there until the next morning. Stirred occasionally. The next day sieved and taken to our other house. I’m going to use it for a now-secret project, but more on that later. I have to be honest, it didn’t smell like anything at all. That was a bit disappointing, but it doesn’t matter that much, I’ll make up for that later.

The neighbor told about a piece of land that a relative of his had for sale. Now we are always curious about nice pieces of land and after we had been told exactly where it was, we drove there. It was about 10 minutes from the village and through small country roads. Finally we came across a field with grape bushes, I had been looking for that for a while. There is namely wine from Cabanes, but where are the grapes to make this wine. Well here, among others, but with a field full of withered and dried out grapes.

The site itself was a special site with many levels and many olive trees.

The house itself still needed some work, but then you have a sea view.

But in the end we didn’t like the place, I don’t know why. But it is also not recommended for anyone else.

On our way back we were driving passed the area where they shoot for little birds.

So the end of November was the perfect time to pick the fruits from the strawberry tree and I think it’s still possible at the beginning of December. But I’m not that fond about the taste.

A friend of mine told me not to eat too much of it, because that wouldn’t be good, well I really can’t eat more than half.

But I did make a jam out of it, thanks to that same friend who sent me a recipe. I now have 4 pots and I have to be honest: I still have to taste.

Once in a while, especially when we drive from one house to another, we pass a restaurant, which is located outside a village, but on a road: Pinar Ver

There are always a lot of people coming for dinner, especially many colleagues from companies in the area and the menu costs 12.50 or something and consists of 3 small starters, a main course, dessert. We usually drink red wine with aerator and it’s good food and very friendly service.

The restaurant is located next to a busy road, but also on the edge of a small forest with pine trees and next to the restaurant is a special garden with cacti. This time we saw a large group of peacocks between the cacti.

This week John installed a window. A window that was in the wall on the other side. Glass still needs to be put in, but that will come later. The floors will be poured next Saturday, so before that time we have to remove all existing items from the rooms. The windows also seem to be well advanced, so hopefully everything is closed and ready before we go to the Netherlands.

I actually find it more and more fun to put together a list every time and I’m actually very curious what you think of it. I don’t want to show you more than 15 songs at a time and I have many beautiful songs, so the upcoming lists are already pretty filled. Whether anyone likes it or not.

Thank you again for your attention and your time and I hope you enjoyed it.

If you have not yet indicated to me that you want to be on the mailing list and you want to be kept informed of the upcoming newsletters by e-mail, let me know and I’ll put you on it.