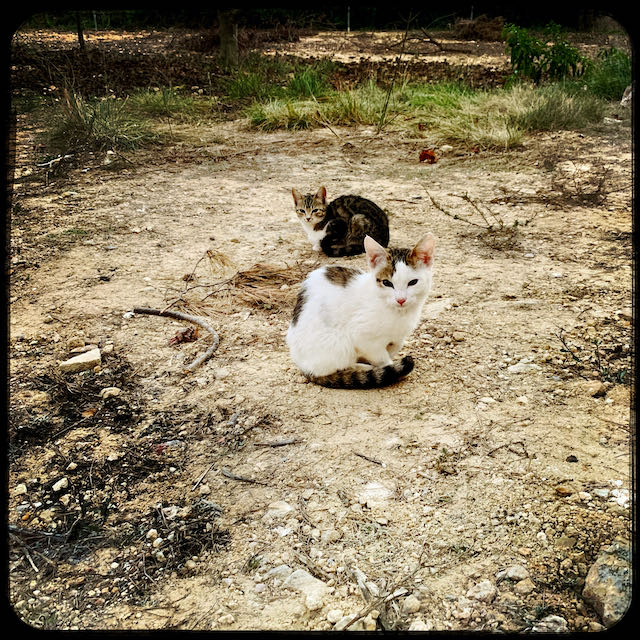 Here in Spain the evenings are getting colder, but I’m still sitting on the patio almost every evening with the wood stove burning and close by. I feed the cats with sausages and they come closer and closer and sometimes I go in a bit earlier, but it is still doable. The wood stove is also burning inside and we now let it smolder at night. So that when I have to get up at 6.40 the next morning, it is not too cold.

The lambs
Last week I indicated that I wanted to tell about the births of two lambs.
January 27th we visited Paul, a friend of mine, who had moved to his plot of land a few months earlier, on top of a mountain, near Tortosa. Tortosa is about 100 km north of Cabanes. While we were taking a walk on his ‘estate’, which contains several hills and sometimes impermissible pieces of land, we saw a goat standing in the field, which at that moment was giving birth to a lamb. The rest of the flock was close by, and the shepherd was called in and took the goat with the lamb.

Last Sunday we were cycling in the neighborhood.

While we were almost back to the village I saw a sheep standing in the meadow. Just before that we had stopped to listen to the sound of many bells and wondered what kind of animals wore these bells: cows, sheep, goats. So sheep. Of course I stopped immediately, because I thought it could be a birth and I saw something sticking out in the sheep. Two seconds later, something spewed and the lamb was born. This time the road to the herd was impassable, so we had faith that the sheep will be found again. I assume this will happen very often.

For about 3 years we had a small solar panel, on which we could just use a small refrigerator without freezer and some lamps. This was fine to start with, of course, but now that we’re here more often, it’s nice that we have a somewhat more extensive system since February this year.

Because we didn’t use it anyway and new Dutch residents in the area have to wait longer for their solar panel supplier than expected, we lent our set this week. In any case, enough for a small refrigerator, to light a few lamps, to charge some devices and especially of course the telephones.

The life of a feral cat is not a bed of roses. The two little kittens, who last week were still lying on the couch with mother and always appeared here with mother, were suddenly gone for a few days. Father and mother were walking around here, but not to see the little ones. Until two days ago, I heard them meow for the first time, but they didn’t come any closer. Well, mother, she came to eat well. Yesterday with the tactic of throwing small pieces of sausage at them and getting closer, I managed to get them closer again. But it’s different, it seems as if mother has said: you can’t go there anymore, that’s my terrain and now you just have to figure it out for yourself. mother blows and is unkind to her children and they walk around a bit lost. But I got them back to the top of the terrace, but as soon as I move, they run away quickly.

The two white chickens still like to lay on the large table downstairs. As soon as the door of the run opens, they run towards it. One of the red chickens, Hans, has not laid again after about 3/4 months and they are doing fine. It seems as if Hans’s hormones have worn off and she is back to normal.

For months now and then I hear barking next to our terrace, when I sit on the terrace in the evening while it is dark. I immediately grab the lamp and go see what is barking. I never see anything, nowhere at all. Of course I also have my phone in my hand, because even though it is pitch dark, a photo can sometimes still be taken. A few weeks ago we saw him flee and for the rest we only notice that all water troughs are completely dry every morning and everything is completely eaten. This week we suddenly saw him for the second time, while it was getting dark. Beautiful dog and we think he has a good home nearby but goes out occasionally.

We come here often and even though it is a building materials store, we like it too. Wonderful store, where I especially enjoy the order and clarity of the products so much to view and photograph. In the tile department it is always a matter of checking whether there is a product from John among them and this time too it was a hit. Always funny, as if it were a work of art. But we went to see what the prices and what types they had of an aggregate, what we could possibly do. wanted to buy to have as an extra with the batteries and we had to buy all kinds of small parts again.

This week we had lunch outside twice: 1 x at Bar Branto, the bar closest to our site. Approx. 10 minutes walk. Every working day a menu of 8.50 is offered and that includes 3 courses, salad, drink and coffee. Simple, but often a varied menu and often tasty.

Two days later we agreed with our friends, Juan and Lut, to have dinner at Pou de Beca. A restaurant far outside the built-up area, in a kind of valley

and a kitchen with honest and healthy products. We often drink wine there from Cabanes or another village in the area. Although I haven’t seen a grape bush yet, except our own. Always super tasty, but I always have to pay very close attention to what the menu is, because it is not written anywhere and is read aloud.

Oranges
They are open from the end of October to about mid-May: the orange shop near where we also live in Castellon. Besides oranges, also tangerines, lemons and soon also super tasty avocados. These kind of small shops can still be found here and hopefully for a long time to come.

The workmen are still waiting for the floor, but at least we have moved another batch of wood. With the car from bottom to top and then I indicate in an attic, which we do not use yet.

I’ll keep it short: it’s very nice and I enjoy being together with a group of people every morning and paying attention to my body. I also like drinking coffee afterwards: I get the chance again to practice my best Spanish and I get to know nice people.

No news this week from yields from the field, but the coming weeks I have a few things on my list, still have to pick some almonds and what to do with the olives? I havent decided yet. You know there’s actually a lot more I’d like to talk about. Things I’m researching, doing even more, what I plan to do, like growing mushrooms, setting up a bigger vegetable garden and more. But for this time, thank you for reading and I look forward to getting back to you next week.

Have a great week!